The Boston Consulting Group (BCG) has been conducting an annual survey to capture India’s explosive growth in digital consumer spending. Neeraj Aggarwal, Senior Partner and Chairman, Asia Pacific, BCG talks about his views on the “The evolving Indian consumer” in a conversation with Rahul Chowdhri, Partner at Stellaris and also a BCG-alum. He factors in India’s complex and growing market, consumers’ evolving spending patterns, the increasing and substantial impact of digital technologies on spending, and emerging trends that could alter consumer markets. Edited transcript:

Neeraj: When we started out with the internet, it was typically consumed by what we call the 3Ms – the Metro cities’ dwellers, the country’s Male population, and the Millennials. The first apparent shift in the 3M paradigm happened with the spread of users beyond the metro cities. Additionally, during our annual Digital Influence Study last year, we noticed that the diffusion among the country’s female and not-so-young population is expected to see dramatic growth rates by 2020 when compared to males and millennials. For instance, the percentage of females adopting the internet is expected to grow 25% annually until 2020, while male population adoption will grow at a mere 8%. This, in my mind, is a huge shift in terms of what a typical digital consumer looks like and will have a dramatic impact on the behaviour / adoption of what the internet means to these people.

With regards to why the “typical consumer” is changing, the driving force has its roots in a combination of increasing income across India, price elasticity associated with the Indian consumer, and a shift in mobile data pricing models from “metered” to “all you can eat”. We classified consumers into 5 segments based on their annual gross household incomes. 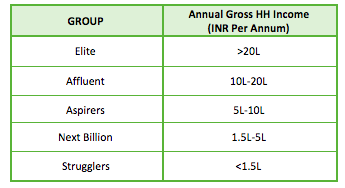 There is a movement of people from lower income segments to higher income segments, creating a diamond shaped economy from a pyramidal one. Income levels are rising across not only tier 1 cities, but also tier 2 and tier 3 cities. This gives people the financial means to pay for internet access. Additionally, there is high price elasticity associated with the Indian consumer especially in the Next Billion and Aspirer classes. If the price is even a bit too high, the demand drops. Sometimes, if a consumer wants to spend INR 200 for a product or service, he or she will not exceed INR 200 irrespective of a price change. Another reason was the switch in pricing models from “metered” to “all you can eat” by carriers such as Jio, Airtel, Vodafone, and Idea. Previously, the cost per GB

increased with higher usage. However, that is not the case now. For INR 200 to 400, one can buy more GBs of data than one can consume.  Due to the high elasticity, when the data prices went down, the demand went up dramatically. The increasing incomes across cities tied into affordable internet access is driving rapid growth of digital footprint in India. A large proportion of these new digital consumers lie outside these 3M’s thus changing what we think of as a “typical digital consumer”.

Rahul: What is changing about the preferences of consumers today?

Neeraj: While the consumers of the older (our) generation believed in the creation of assets and saving for their future generations by staying away from indulgences, the consumers of today believe in the value of experiences as a reward for themselves.

For instance, unlike old times, there has been a noticeable increase in the demand for customized and personalized products wherein each family member consumes according to his or her needs and preferences. Today, we see an interesting shift towards “I, Me, and Myself”.

Another peculiarity in recent years is consumers taking pride in Indian brands, contrary to the default preference shown earlier towards international brands. Nowadays, there is a lot of interest and demand for Indian brands that are well packaged and branded. Forest Essentials and FabIndia are prime examples. People want the Indian touch. There is a huge number of fans for Indian brands if the products are packaged and brought to them well.

Rahul: Are there any particular categories where you expect growth to occur?

Neeraj: Yes, there are a few categories that are going to enjoy a larger share of the growth pie when compared to the rest. According to our analysis, the top 3 will be premium products, health and wellness, and lifestyle/recreation. On the other hand, the consumption of affordable treats and basic staples would see lesser growth. However, the consumption take-off varies a lot based on income distribution. I would say that the elite and affluent groups will show the most growth in the consumption of premium, health and wellness, and recreation products/services. When compared to the “next billion”, the elite and affluent will spend 8 times more on premium category and 7 times more on health and fitness. In contrast, the elite and affluent will spend only 3 times more on staples when compared to the next billion. This is because of the limited scope of premiumization in this category.

Rahul: There has been a lot of talk about the fact that while India has almost the same population as China, we are still not seeing the take-off China already has. An example is E-commerce. E-commerce is $1 trillion+ in China, whereas it is $20-30 billion in India. If what you said is indeed happening, why is India not seeing the growth and large numbers?

Neeraj: Although India has not reached the same numbers as China, I have good reason to believe that we soon will.

The Indian telecom space altered completely with the launch of Reliance Jio. It also proved that given the right data pricing, there is huge demand for the internet. In a reaction to Jio, other telecom giants such as Airtel, Idea, and Vodafone changed their pricing scheme from “metered” to “all you can eat”. This enabled people to buy more data than they can consume for low prices. The availability of affordable smartphones compounded to this and pushed up the average data consumption per user by 12 to 14 times to 8-10 GB per month within 3-4 months. This has resulted in various consequences, which has filled me with optimism that we will catch up to China.

India will have about 650 million internet users, more users than the population of six “G7” countries, by 2020. There has been an explosion of digital consumption, which is a function of time spent on the internet, the kind of activity the user is spending time on, and the form factor the person is using. All three of them are increasing/improving with time. Online shoppers do not shop just due to discounts, but also due to convenience and available assortment. This resonates well with the increasing number of nuclear families in India, who value convenience.

We are also seeing a rapid shift in the pace at which digital users evolve from digital footprint to digital influence and digital buying. I’ll first briefly provide context to these terms. Digital footprint means the number of people who have digital access. This number has catapulted over the previous four to five years and has grown 2.5 times since 2013. Digital influence refers to the use of digital platforms somewhere in the purchase process. This does not necessarily have to be for buying but can be a part of the pre-purchase or post-purchase process. This number has gone up by about 4 times during the same period. Digital buyers are people who actually buy online, and this number has gone up by a mammoth 9 times! The conversion rate, which is the ratio of actual buyers to audience reached, has thus improved significantly. The digital buyer to digital footprint ratio has increased from 13% in 2013 to 50% in 2017. This is due to the increasing internet penetration, digital influence, and rapid growth in expenditure (especially by the elite and affluent groups).

To sum up, these are the reasons I believe India will soon catch up to China. The fact that our rate of increase in online buyers as a percentage of internet users is higher than China’s speaks volumes and justifies my opinion.