A version of this article was published in Mint on September 3, 2018

Through the tumult of the past few decades, one fixture has remained constant on Indian roads – the humble motor scooter. From the elegant Lambrettas of the 1960s our grandfathers rode, to the spanking new Athers our children desire, the scooter has remained our favourite mode of transport.

With approximately 200 million two-wheelers on the road, India is by far the largest market globally for motorcycles and scooters. Most middle-class Indians, even those who don’t have a scooter at home, learn how to ride one at an early age. As the chart below shows, even car owners prefer to commute by two-wheelers by a factor of 4 to 1. All of this makes India an ideal market for technology disruption on two wheels.

We have just invested in one such company, Vogo, that uses mobile and IoT technology to let you ride a scooter from anywhere to anywhere. Vogo offers a simple service: use their app to find a scooter near you, ride it to where you want, and leave it there for the next customer to use. The service is similar to popular Chinese bicycle-sharing services Ofo and Mobike, except that our roads, traffic, climate and usage habits all favour scooters over bicycles.

The past two decades have seen a massive buildout of public transport infrastructure in our cities. In 2000, Kolkata (then Calcutta!) was the only Indian city with metro rail. Today most large Indian cities have rapidly expanding metro networks. While the metro provides good arterial connectivity, there are few solutions for last-mile travel to and from metro stations. As per our user research, 54% of respondents would prefer to use public transport, but don’t because of lack of first/last mile connectivity. Millions of potential public transport users are either adding to the congestion on our roads, or are paying more to get to the station than the cost of the metro ride itself.

Self-drive scooters can provide an efficient and affordable feeder network that gets people to and from public transport end-points quickly and inexpensively.

The promise of scooter sharing is not limited to public transport connectivity though. Our research shows that upwards of 80% of our day-to-day travel happens within 3 km of our homes. Widely available scooters can significantly reduce the inconvenience of waiting for autos and taxis, or alternatively wading through traffic and finding parking for a personal car. In our user research below, commuters using a wide range of transport options showed a high willingness to adopt self-drive scooters. 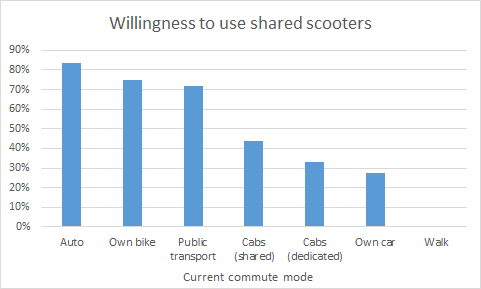 Self-driving vehicles may be a few years away, but self-driving consumers are here already

Shared scooters have the opportunity to be India’s most affordable form of motorized transport. The cost advantage stems from two factors: higher utilization and self-driving. While our personal scooters stand still for a majority of the day while we are at work, a shared scooter can work all day and do 8-12 daily rides. This means the scooter’s cost is amortized over a much larger number of kilometers driven every month, bringing down the cost per kilometer drastically. Equally importantly, unlike with cabs and autos, scooter riders don’t have to pay anyone to drive them to their destinations – self driving vehicles may be a few years away, but self-driving consumers are here already! As a result, a shared scooter costs less than half what an autorickshaw does, making them widely accessible for the daily use of most middle class Indians.

The service leverages technology in every step of the process: from showing the location of nearby scooters in the app, to unlocking the scooter on demand for the right user, to ensuring that scooters are available in areas of high demand, to letting the company know when a scooter requires refuelling or maintenance. Several of these processes could not have been automated even a few years ago, and therefore the service would either not exist or be too expensive for a majority of Indians.

The biggest technology leap in transportation, though, is still ahead of us: the transition to electric vehicles (EVs). Shared scooters are likely to be the first viable EVs in India – they are utilized far more than personal vehicles, have a critical mass to make battery-swapping viable, and can leverage the provider’s wide and distributed parking network for battery charging. From the company’s point of view, EVs will eliminate the need for centralized refuelling and dramatically reduce maintenance requirements. If the current cost curves hold, we expect the transition to electric to start within two years, and demonstrate the world’s first large-scale, unsubsidized, mass-market adoption of electric vehicles.

Of course, scooter sharing ventures are not without risk. Unlike other transportation aggregators (for flights, buses, taxis etc.), shared scooters will not operate in a marketplace model. That means the company will be responsible for everything from refuelling to maintenance to inventory redistribution, all operationally intensive tasks even when aided by technology. It will also be a capital-intensive business with the company owning all the scooters – while asset financing is widely available, the service providers will need to raise large amounts of capital to fund deposits and operate the scooters. And like in every other venture-funded space in India, there will be intense competition for both customers and investors.

Regardless of who wins, scooter-sharing represents a unique opportunity for technology-led change: to revolutionize how India commutes; to decongest our roads and make public transport accessible; to pave the way for greener transport for all; to once again make the scooter buland bharat ki buland tasveer!