Having met dozens of companies in the space so far, we are not exaggerating when we say that we believe electric vehicles (EV) to be a once-in a-generation technological shift with massive ramifications – for businesses as well as society; consequently, it can also present attractive investment opportunities.

Historically, the first automobiles were electric, before innovations across the board made the advantages of fossil-fuel technology overwhelming. The result is one of the largest industries in the world, with vehicles alone contributing 3.5% of global GDP and 7% of India’s GDP. The current automotive industry – including not just internal combustion (IC) vehicles but also energy – is massive, and composed of several large sub-industries, as shown in the graphic below. 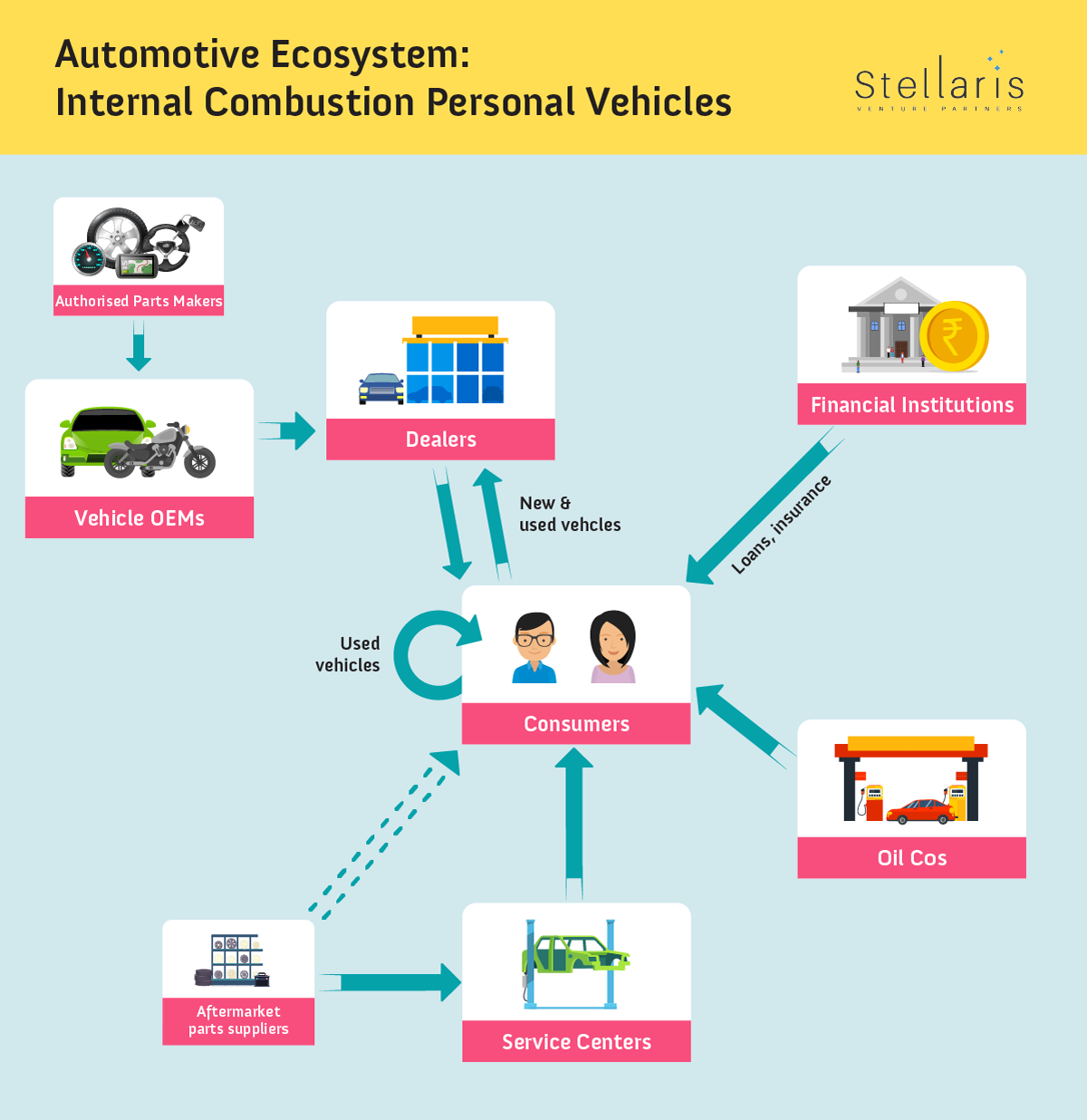 We believe EVs, in their currently emerging form, can alter – either materially or fundamentally – each of these constituent markets, and the overall automotive industry at an aggregate level. As a result, EVs can also lead to structural changes to a closely associated industry – mobility.

As the name suggests, EVs use electricity as their power source – the electricity generation happens through batteries utilizing a range of underlying chemistries, with Lithium-ion (Li-ion) being the most popular – as opposed to combustion of fossil fuels in traditional vehicles. Since their powertrain is electric and not mechanical, they also have much fewer moving parts – close to 1/10th for 2Ws – as compared to IC vehicles. As a result, EVs have dramatically reduced running costs – the energy cost per km for Li-ion 2W EVs in India is 1/10th that of their IC counterparts, and they need much lower mechanical maintenance.

Despite these advantages, EVs have yet to go mainstream for two critical reasons:

However, recent developments in each of these areas, as shown below, have been extremely favourable for EV adoption. Battery pack costs, as high as $1000/ kWh in 2010, are now approaching $200/ kWh. Considering that batteries are ~50% of the cost of the overall vehicle even at today’s prices, EV prices have fallen by 2-3x in less than a decade. IC vehicles, on the other hand, have approached their asymptotic limits of efficiency. There are also significant increases in energy density for battery packs – volumetric energy density has almost doubled since the turn of the century, leading to more energy – and hence more distance driven – for the same weight, ameliorating range anxiety concerns. 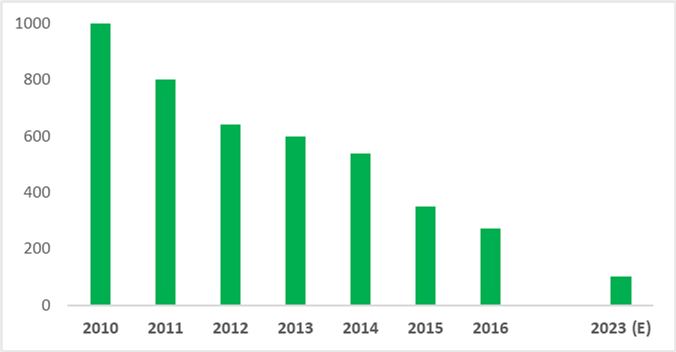 IC Vehicles close to maxing out on their efficiency limits 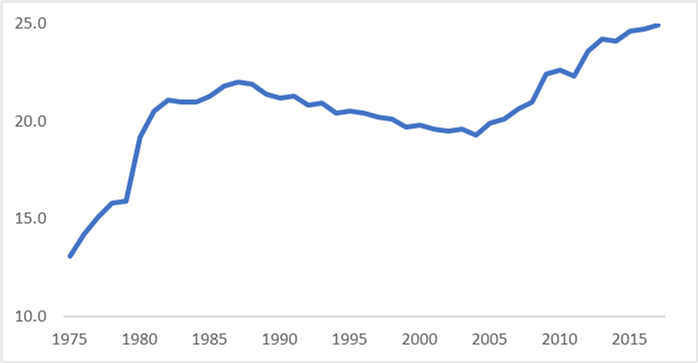 Fuel efficiency of IC vehicles in miles per gallon. Data from USEPA 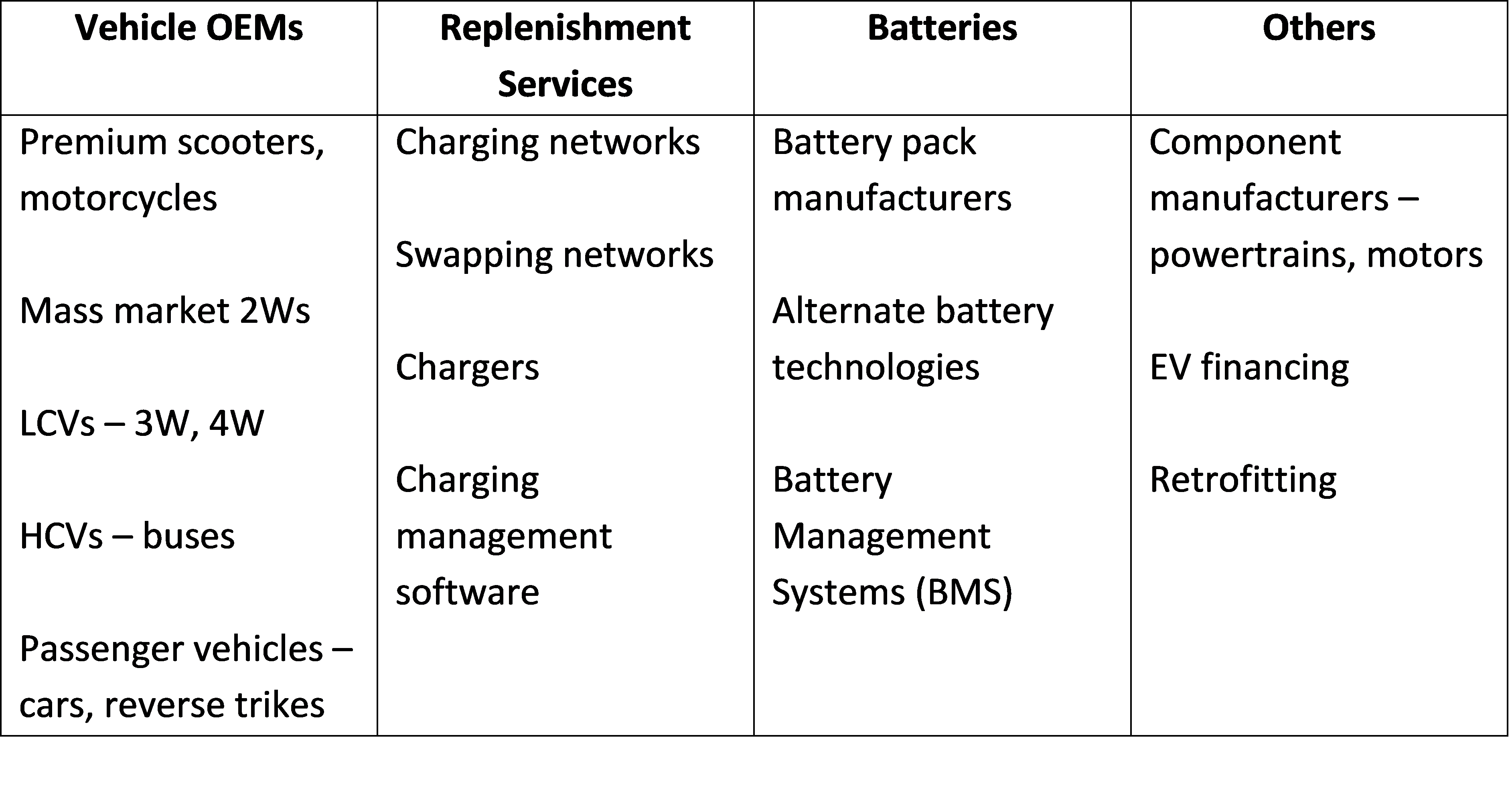 China currently presents the best example of this evolution. With 1M new electric cars (including hybrids) sold annually, more than 50% of passenger EVs globally are consumed in China. As shown in the table above, many different moving parts need to come together to make it happen. While most countries have let market forces drive this evolution, China’s EV ecosystem evolution is led by the state – it is mandated that 10% of all vehicle sales by each OEM needs to be electric (or hybrid) in 2020; there are ~500,000 charging points in China, which are being expanded to 4,000,000 charging points by 2022; there are separate driving lanes for low speed 2W EVs.

This is a multi-billion dollar question!

We are optimistic, because the fundamental economic advantages of EVs are hard to ignore for the government as well as private players. That said, we find many constraints today. To enumerate a few:

Given these challenges – where do we begin? Stay tuned for the sequel!